Throughout the ages, gold has captivated many cultures and societies. In our current post-gold-standard world, many feel that with the instability that occurred in the first decade of the 21st century, some form of the gold standard should be brought back. The gold standards implemented in the 19th and 20th centuries had inherent problems. Due to this rocky history, many people do not realize that gold, under the current free market system, is a currency.
Gold has often been thought of in relation to the U.S. dollar, mainly because gold is usually priced in U.S. dollars, and there is a rough inverse correlation between the US$ and gold prices. These factors must be considered when we see that the price of gold is simply an exchange rate: In the same way one could exchange U.S. dollars for Japanese yen, a paper currency can also be exchanged for gold.

Gold is a Currency
Under a free market system, gold is a currency, although it is not often thought of as one. The price of gold will fluctuate relative to other forms of exchange, such as the U.S. dollar, the euro or the Japanese yen. Gold can be bought and stored, and while it is not often used as a direct payment method for everyday use, it is highly liquid and can be converted to cash in almost any currency with relative ease. (To learn about how gold rates are fixed, see “The Insiders Who Fix The Rates For Gold, Currency And LIBOR.”)
Gold, therefore, has tendencies like those of a currency. There are times when gold is likely to move higher and times when other currencies or asset classes are likely to outperform. Gold is likely to perform well when confidence in paper currencies is waning, when there is potential for war and/or when there is a lack of confidence in Wall Street-type trading instruments.
Currently, gold can be traded in multiple ways, including buying physical gold, futures contracts and gold ETFs; alternately, investors can participate in just the price movements without owning the underlying asset by purchasing a contract for difference (CFD).

Gold Standard History
Silver and gold have been used in some capacity as currency since before the middle ages. The modern era of the gold standard began in Britain. In 1717 Isaac Newton, master of the Royal Mint at the time, overvalued the guinea (a coin minted in England between 1663 and 1814) in terms of its sterling value, and thus forced most of the silver out of circulation.
Wars within Europe and trade deficits also depleted silver reserves. Up until that point, silver and gold standards had both been in place, but by 1821, a gold-only standard was adopted. (You can read some of Newton’s official Royal Mint reports here.)
Silver was still used in coinage (along with gold) but by this time, the use of bank notes was increasing. By 1816, Bank of England notes were backed by a specific amount of gold.
As for the U.S., they began using a bi-metallic silver-gold standard upon passing the Coinage Act of 1792. Copper was also used in coinage, but was not convertible at specific rates like gold or silver. The goal was to use silver for small denominations and gold for large denominations, but this required a gold-to-silver ratio, which kept fluctuating based on market forces. The rate was fixed at 15 ounces of silver to one ounce of gold, with the market rate typically ranging between 15.5 and 16 to 1. Major gold discoveries starting in 1848 decreased the value of gold relative to silver, thus making silver worth more on the open market than as a currency. The U.S. continued efforts to maintain a bimetallic standard, but by 1873 it had adopted an unofficial gold standard.
The 1900 Gold Standard Act required the U.S. to maintain a fixed exchange rate with other countries on the gold standard. This was suspended from 1914 to 1919 due to World War I. In 1944 the Bretton Woods Agreement established the International Monetary Fund (IMF) and the World Bank, and set par values for currencies in terms of gold. Countries were to maintain their exchange rate within one percent of that par value.

1968 saw a surge in gold demand and resulted in a U.S. Congressional repeal of the requirement that Federal Reserves Notes be backed by gold. In 1971, President Richard Nixon said the U.S. would no longer convert dollars into gold at the official exchange rate. This was only supposed to be a temporary measure until the the U.S. dollar, in terms of gold, could be revalued. The U.S. dollar was losing value, and other countries didn’t want to hold U.S. dollars, but rather convert their dollars to gold. This ended up depleting U.S. gold reserves. In 1972, the U.S. dollar amount required to buy a troy ounce of gold was raised from $35 to $38. In 1973 it was raised to $42.22. The arrangement was still unfeasible as the U.S. would have needed to convert too many U.S. dollars into gold. The U.S. dollar became a free-floating currency. In 1975, gold began trading, for future delivery, on New York and Chicago exchanges.
The age of gold standard prominence has passed, although many counties still keep significant gold reserves including the U.S., France, Germany, Italy, China and Switzerland. 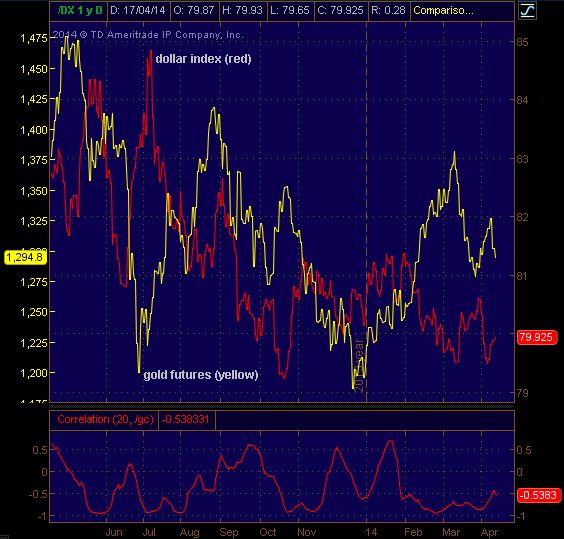 The U.S. dollar’s relationship to gold prices can be linked to the Bretton Woods System, whereby international settlements were made in U.S. dollars and the U.S. government promised to redeem dollars at a fixed gold rate. Although the Bretton Woods System was dissolved in 1971, it continues to be the case that whenever gold is discussed, talk of the U.S. dollar usually ensues.
While gold and the U.S. dollar are entangled in a relationship, as most major currencies are, it is important to remember that gold and currencies are dynamic and have more than one simple input. Gold, for example, is impacted by far more than just inflation, the U.S. dollar or war. Gold is a global commodity and therefore, gold reflects global sentiment, not simply the sentiment of one economy or group of people. The chart above shows this; while there is often an inverse relationship between the U.S dollar and gold, it is not perfect. Multiple other factors impact both gold and the U.S dollar, which means these asset classes will move independently for periods of time – like any exchange rate.

Problems with the Former Gold Standards
When considering gold as a currency, many people support moving back to an adapted form of the gold standard. There were various problems with the gold standards that were implemented prior to 1971.
One of the main problems was that the systems were ultimately reliant on central banks to “play by the rules.” The rules required central banks to adjust the discount rate to allow for proper inflow and outflow of gold to bring the exchange rate back to par with trading partners. While many countries followed the rules, several did not – namely, France and Belgium. Any system requires the cooperation of the parties involved, and the gold standard was no exception.
A second problem with the gold standard was that while it did maintain average price stability over the long run, there were still short-term price shocks that needed to be absorbed by economies. The California gold discovery of 1848 is a prime price shock example. The gold find increased the money supply, which raised expenditures and price levels, creating a short run of instability. While this could be counteracted with the proper protocol, it should be noted that economic disruptions did occur during gold standard times, and no attempts to sustain a gold standard have lasted. (For more, see “Why Gold Matters.”)
Based on the numerous prior attempts at making it work, the gold standard is unlikely to be re-adopted in the future without major modifications. In a free market world, it is easy to exchange one currency for another, or exchange it gold. While many argue that fiat currencies have no value, except for the psychological belief that the currency will buy goods, gold also fluctuates dramatically in value and in public perception and therefore may not be ideal for backing a currency.

Gold as a Currency – Revisited
A post gold-standard, free-market system basically allows gold to act as a currency. This means gold, often referred to as a “safe haven,” is an indicator of uncertainty. Gold allows traders and individuals to invest in a commodity that can often partially shelter them from economic disruptions. As mentioned above, disruptions will occur under any system, even a gold standard. Just as there are times when it pays to cross a border to buy goods in another country because of a favorable exchange rate, gold should also be viewed in this way. There are times when it is favorable to own gold and other times when the overall trend in gold will be benign or negative. Even with the official gold standard gone, gold continues to be impacted by currencies and global sentiment; therefore, gold must be traded in the same way as a currency is traded.

As for the problem of countries not playing by the rules, this is likely a problem that will not go away under any system. But at least under a free market currency system, over the long run, countries are penalized for not adhering to protocols.
No matter what system is in use, its effectiveness relies on investors’ belief in the system. The lure of the gold standard is that it provides the illusion that paper money is backed by something substantial. Yet gold can neither be eaten, nor can one build a house from it, making its value a matter of the mass perception of the global market place. Free markets allow gold to act as a currency for those who wish to use it, while other currencies are backed by those who accept that paper money will pay for goods and services. This belief is reinforced by advertising: An ad not only promotes a product, but by providing a price, it reaffirms the idea that paper money buys goods and services. Gold need not enter the equation, except for those who wish to invest in a commodity/currency during times when it is advantageous to do so.

By purchasing gold, people can shelter themselves from times of global economic uncertainty. Trends and reversals occur in any currency, and this holds true for gold as well. Gold is a proactive investment to hedge against potential threats to paper currency. Once the threat materializes, the advantage gold can offer may have already disappeared. Therefore, gold is forward-looking, and those who trade it must be forward-looking as well.
The Bottom Line
Under a free-market system, gold should be viewed as a currency like the euro, yen or U.S. dollar. Gold has a long-standing relationship with the U.S. dollar and over the long term, gold will generally move inversely to it. With instability in the market, it is common to hear talk of creating another gold standard, but a gold standard isn’t a flawless system. Viewing gold as a currency and trading it as such can mitigate risks to paper currency and the economy, but people must be aware that gold is forward-looking, and if one waits until disaster strikes, it may not provide an advantage if it has already moved to a price that reflects a slumping economy.